It has become a tradition for a friend (Andrea Uravitch) and I to take pictures of the Inaugural festivities on the Mall a day or two before the actual Inauguration. We get to see changes to the Mall, building of stands, TV channels and reporters setting up, first aid tents, jumbo trons and rehearsals. 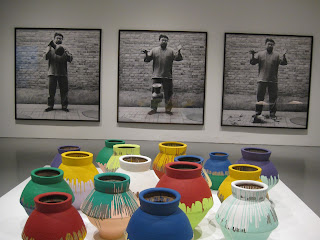 We start at the Hirshhorn on the south side of the Mall as there is a huge window on the top floor where you can see both directions of the Mall. This year it was closed (security?) However the wonderful Ai Weiwei exhibit was on so we saw much of it before going on. 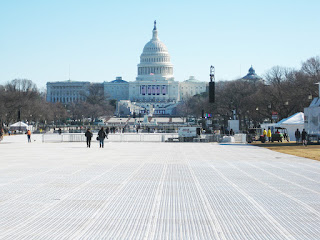 We walked out on the Mall and watched as the covering was being put down to protect the grass from the thousand of feet that would come the next day or so. There were also thousands of porto potties (a design element?) along the edges of the Mall. 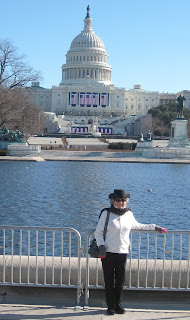 We walked closer and closer to the Capital. 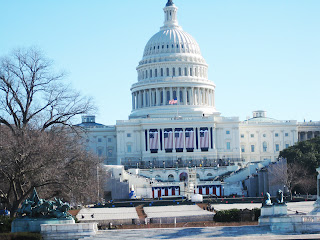 To see the decorations.
It was a beautiful warm day, so different from the well below freezing day 4 years ago.

From the Mall we went to the National Gallery of Art to see a couple of exhibits. Going from the East Wing over to the main building we found the newest sculptural addition.
Michelangelo's David-Apollo, one of his unfinished marble sculptures is here till March 3.
This small (compared to the David in Florence) sculpture was last here during the Harry S. Truman's Inauguration. 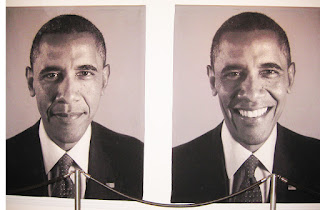 We walked up to the National Portrait Gallery to see the twin tapestries of President Obama designed by Chuck Close. They were approximately 8 feet high.
We also spent time viewing the Drawing on the Edge exhibit. 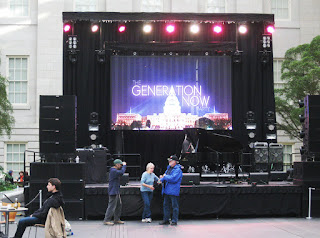 In the huge covered atrium between the Smithsonian's Portrait Gallery and the Museum of American Art a stage was being set up for one of the Inaugural parties.

Now, rather than join the crowds, we stay at home and through TV are able to see every direction of the National Mall as the festivities unfold on this celebratory day.