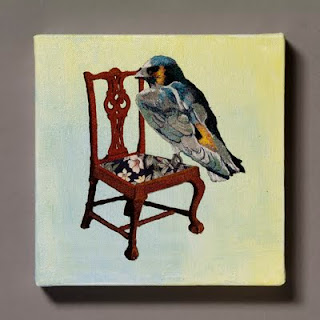 Taking time off from working on the Art Applications for the iPad, I began to spend more time  concentrating on the 80, 8 by 8 inch, art works I hope to create this year. This is the first group I have had photographed, a series of nine 8 by 8 inch embroidered works. I was having a difficult time coming up with a name for this group and Barbara Smith suggested Wing Chairs.  On this first chair is a bird, a Cliff Swallow. 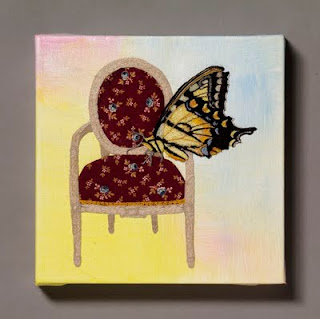 This butterfly is a Swallowtail that I
embroidered from a photograph I took while it was sitting on a cone flower (not on a chair) in my front yard. 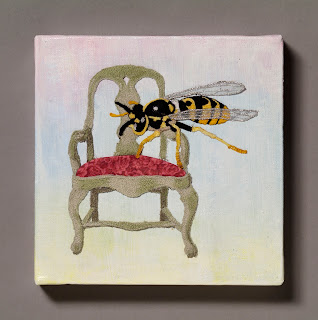 The bee is also embroidered from a photograph where the bees were swarming. I do enjoy putting odd images together. That is why I chose chairs that would be in a home, as the pedestals for these birds and insects. 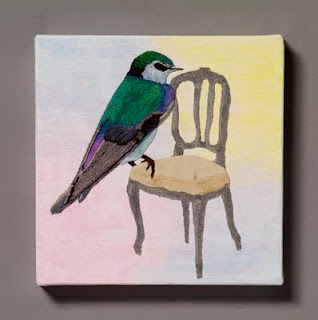 This bird is a Violet/Green Swallow. All the bird images are embroidered from photographs I took a couple of years ago when on a bird watching tour in the area of the high desert on the eastern side of the Sierras. We traveled from Carson City, to Lake Tahoe, and on into the foothills of the mountains while heading south to Lake Mono and the eastern edge of Yosemite, during this tour. 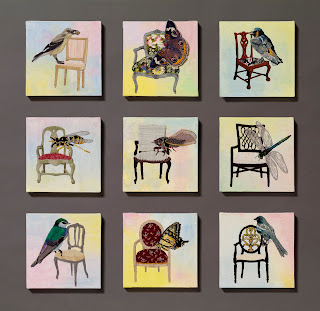 This is the full compliment of nine 8 by 8 inch canvases titled 'Wing Chairs'. Each embroidered chair and accompanying image is placed on painted stretched 1 1/2 inch deep canvas. The last two birds shown are Clark's Nutcracker (upper left) and a Spotted Teehee on the lower right chair. There is a moth in the top center panel, a cicada in the center row and a dragon fly on the right center chair. I had photographed the cicada the last time they appeared in the Washington DC area.
More series will be coming as they are photographed.
Posted by B. J. Adams Art at 8:41 AM